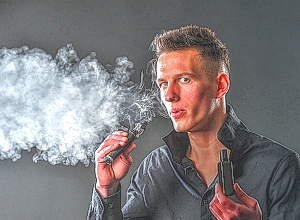 To help the world’s 1.3 billion smokers, physicians must understand that it is unethical to withhold from patients information on tobacco harm reduction products that can reduce the damage wreaked by cigarettes, said Dr Kgosi Letlape, president of the Africa Harm Reduction Alliance, at last week’s SANCA Addiction Conference 2021. “We should go beyond the smokescreen about the industry. The focus should be on the interests of the smoker.”

“My message today is that with harm reduction we see a human face,” said Letlape. “Sometimes, smokers are treated as if they do not exist – smokers must quit or die.”

The Addiction Conference 2021 was a virtual event hosted from 21 to 23 July by SANCA – the South African National Council on Alcoholism and Drug Dependence. It attracted more than 600 registrations from 41 countries and 95 speakers from around the world.

Letlape chaired the conference and moderated its Tobacco Harm Reduction Symposium. He said surveys in South Africa had shown that more than 70% of smokers want to quit. But only a tiny proportion are advised on cessation by a health care professional. “The level of disdain for smokers is high. It is part of our unconscious bias.”

Cigarettes will kill one in two people who smoke, Letlape continued. Today there are numerous approaches and products that can help people to quit – or to minimise harm when they consume nicotine – ranging from nicotine replacement therapy to tobacco products like e-cigarettes and heat-not-burn devices to snus (snuff) pouches, to psychotherapy and quit apps.

The science of nicotine has advanced rapidly in the past decade. While nicotine is what smokers are addicted to, it is not what kills them. That is done by hazardous chemicals and tar emitted by combusting cigarettes. Thus unlike with alcohol, which is the most harmful element involved in drinking, there are less harmful alternatives for nicotine addicts.

There has been considerable controversy around e-cigarettes based on lack of long-term evidence regarding their safety. But it can safely be said that they are less harmful than cigarettes, experts agree. Drawing on an example from COVID-19, Letlape pointed out that billions of people are being vaccinated using vaccines of uncertain safety: “We know that vaccines are not 100% safe. But we know we are better off with vaccines than without them.”

The essence of public health

“My first and most important point is that we should make a distinction between combustible tobacco and all the non-combustible nicotine alternatives. Non-combustible, nicotine-based products can be used for adult smokers who cannot or will not quit. It gives them a fire escape if you like,” Human told the symposium.

“The essence of public health is to prevent disease and to prevent premature deaths linked to any infection or non-communicable diseases such as lifestyle issues like smoking, and to promote health. One key message is that harm reduction should be accepted as a basis for regulation. It's not unknown to public health – it is practised in every country.”

Human gave the example of methadone. “In South African regulations, methadone is enshrined as a way for intravenous drug users to try and step down or quit drugs. Likewise, we have shatterproof windows to prevent injuries. We have safe syringes. Kgosi [Letlape] and I had a big battle to ensure that condoms were put forward as a harm reduction method in HIV-AIDS, as well as access to antiretrovirals in South Africa.” The principal is the same.

In the broader context of addiction, there 1.4 billion people who are overweight and about 15 million intravenous drug users. Also globally, eight million deaths a year are caused by smoking, and more than 2.5 million deaths by alcohol.

Humanity is battling a continuum of dangerous addictive activities, and researchers have placed tobacco somewhere in the middle of the spectrum. There is an element of disadvantage: some 80% of smokers live in lower income countries, and in the poorest households.

With 1.3 billion people smoking, said Human, “combustible cigarette tobacco use is the single most preventable cause of death in human beings. Do you allow adult smokers to continue with cigarettes or do you consider alternatives?”

In the past 10 years, there has been an explosion of innovation in nicotine-based and tobacco-based alternatives to combustible cigarettes. There is an array of e-cigarettes, which use chemical liquids that may or may not contain nicotine, and heated tobacco products, which use tobacco. Both produce vapour at much lower temperatures than cigarettes, avoiding the hazardous chemicals that cigarette combustion produces. There are also smokeless tobacco products, such as snus in Sweden and nicotine oral pouches that are popular in many African countries.

“We must be very careful when we demonise nicotine, because in many ways it is a cultural drug equivalent to, for instance, caffeine,” Human argued. Many people use harm reduction products because they are seen as a less toxic than cigarettes. They are often cheaper. Many people say they enjoy using the products. And there is no second-hand smoke.

E-cigarettes have been embroiled in controversy in several countries, with the primary concerns being their uptake among youth and fears over safety. There has been a proliferation of research, with contradictory findings.

Proponents and detractors of e-cigarettes can find research to support their views, but it is enough for many people that respected groups such as the US Food and Drug Administration, Oxford University’s Cochrane Review and Public Health England have found them to be far safer than smoking, carrying some 5% of the risk associated with combustible tobacco products.

“In most cases there's a consensus on a manifold decrease in risk, although you get scare mongering stories in several countries,” said Human. There is less certainty around long-term risks, which self-evidently are not yet known.

There is growing evidence of success for harm reduction products.

The most spectacular example is Sweden, where over several decades a switch from cigarettes to snus by men has been accompanied by sharp declines in lung cancer and cardiovascular disease.

In the United Kingdom, a decade ago there were 10 million adult smokers and now there are six to seven million. “Obviously, as a lifelong tobacco control activist, I would say that contributed,” said Human. “But it is also the decade in which e-cigarettes have become available, have been properly regulated, and have been a consistent choice for smokers who want to quit or switch.”

Vaping prevalence has increased, and e-cigarettes have become the aid most frequently used to quit smoking. Similarly in the US, a decline in smoking has coincided with an increase in e-cigarette availability and use among adults. A self-reporting survey involving 27,000 citizens of the European Union estimated that 6.1 million have quit smoking with the help of e-cigarettes.”

“We should take these public health gains extremely seriously.”

The need for good regulation

The World Health Organization’s Framework Convention on Tobacco Control states clearly that harm reduction strategies should be part of a suite of measures to make sure that smokers are helped to quit or switch. However, said Human, the WHO has not supported harm reduction and in fact has put up considerable opposition to products such as e-cigarettes.

For leadership in tobacco harm reduction, best practice is to be found in the UK, which saw it as an opportunity to accelerate already-declining smoking rates. The UK shifted to a more risk-proportionate regulatory environment in which, for instance, advertising rules and tax duties reflect the risk basis of the various products.

One of the rules is age restriction. “Tobacco harm reduction products never were or should be part of youth initiation. It should be targeted only at adult users of combustible cigarettes, to give them a way to escape tobacco related diseases.”

A second aspect is product standards, which should be high. Standards would include, for instance, mechanical, thermal and chemical risks for e-cigarettes. “That process is underway in South Africa and needs to be applauded,” Human said.

Physicians should be advocating risk-proportionate and accurate information. “So if one product is not as safe as another, as we've seen with vaccines, we want to make sure that the consumer or patient is informed of the risk-benefit ratio.”

It will be important to get warnings right. Intimidating warnings will discourage smokers from switching, while informative warnings are more likely to achieve a public health goal.

Marketing too is a difficult issue, with proper guidelines needed to ensure that alternatives to combustible tobacco do not fall into the trap of sexy ads that glamorise a product and encourage youth initiation.

Another big issue is flavours, which may be needed to make e-cigarettes attractive for smokers to switch, but have been blamed for an ‘epidemic’ of youth vaping in America. Some regulators have banned all flavours. “But that doesn't solve the issue. You want consumers to be able to move away from cigarettes.”

Taxes also need to reflect risk, said Human. Smokers will be encouraged to switch from cigarettes if alternatives are less expensive. A problem is that governments are as addicted to money as smokers are to cigarettes. “On excise taxes, they get 80% of revenue gained from those products. It is a tall order to get governments to let go of that kind of income.”

An important argument against harm reduction products has been that they are a gateway to smoking. “So far, there is no evidence to back that up,” Human said. Some worry that e-cigarettes might lead to a decrease in cessation or an increase in relapse, and might ‘renormalise’ smoking and the industry behind smoking.

“What is needed is a sensible, risk-based system of regulation. This is possible. It should address the difference between combustibles and non-combustibles. Its primary focus should be to prevent youth initiation or use. There should be clear standards for products and a risk-based framework in place for marketing, pricing and tax.”

“Policy-makers can make things worse if they close down the fire escapes.”

Facebook
Twitter
WhatsApp
Linkedin
Email
Previous articleAHA guideline on elevated BP and cholesterol: 10 jumping jacks and call me in the morning
Next articleWarning from CCSSA and SASA on vaccinations and Ivermectin