Sleep meds make no difference to insomnia over the long term 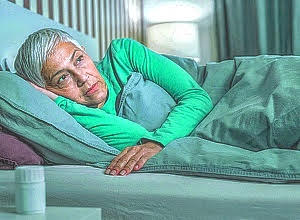 Long term use of prescription meds for insomnia doesn't seem to improve disturbed sleep in middle-aged women, found a study conducted over 21 years, published in BMJ Open. There was no difference in sleep quality or duration between those who did and didn't take these meds for 1 to 2 years, the findings show.

Disturbed sleep – difficulty falling and/or staying asleep and waking early – is common. An estimated 9m adults in the US alone say they take prescription meds to try and get a good night's sleep.

Poor quality sleep is associated with ill health, including diabetes, high blood pressure, pain and depression, and various drugs are prescribed to induce shut-eye. These include benzodiazepines, Z-drugs which include zolpidem, zaleplon and eszopiclone, as well as other agents mostly intended for other conditions (off label use), such as quelling anxiety and depression.

The clinical trial data indicate that many of these drugs work in the short term (up to 6 months), but insomnia can be chronic, and many people take these drugs for longer, say the researchers. They therefore wanted to assess the effectiveness of drugs used to tackle insomnia over the long term among an ethnically diverse group of middle aged women who developed sleep disorders.

The women were all part of the Study of Women's Health Across the Nation (SWAN), a long term multicentre study looking at biological and psychosocial changes arising during the menopause.The women's average age was 49.5 and around half were white.

Sleep disturbances were defined as difficulty falling asleep, frequent awakening, and waking up early and rated on a 5-point scale, ranging from no difficulty on any night (1) to difficulty on 5 or more nights of the week (5), reported during an average of 21 years of monitoring.

Sleep disturbances, as measured on the ratings scale, were compared among those who did and didn't take prescription meds to improve their sleep after 1 and 2 years.

Some 238 women who started using medication to tackle insomnia during the monitoring period were matched with 447 women who didn't take these drugs.

To begin with, sleep disturbance ratings were similar between the two groups of women. Those taking prescription meds for their sleep problems had average scores for difficulty falling asleep, waking up frequently, and for waking up early of 2.7, 3.8, and 2.8 respectively.

This is an observational study, and as such can't establish cause, only correlation. What's more, around half of the women were current or former smokers and 1 in 5 were moderate to heavy drinkers, both of which may affect sleep quality.

Information collected on prescription meds was also collected only at annual or biennial study visits, and there may have been intermittent or periods of no use between visits, say the researchers. Nor were there any objective measures of sleep quality.

Nevertheless, conclude the researchers: "Sleep disturbances are common and increasing in prevalence. The use of sleep medications has grown, and they are often used over a long period, despite the relative lack of evidence from [randomised controlled trials]."

These drugs may work well in some people with sleep disturbances over several years, but the findings of this study should give pause for thought to prescribing clinicians and patients thinking about taking prescription meds for sleep disturbances in middle age, they add.

Objective To examine the effects of prescription sleep medications on patient-reported sleep disturbances.

Setting Longitudinal cohort of community-dwelling women in the USA.

Main outcomes and measures Self-reported sleep disturbance during the previous 2 weeks—difficulty initiating sleep, waking frequently and early morning awakening—using a 5-point Likert scale, ranging from no difficulty on any night (rating 1) to difficulty on 5 or more nights a week (rating 5). Sleep disturbances were compared at 1 year (primary outcome) and 2 years of follow-up.

Conclusions These analyses suggest that women who initiated sleep medications rated their sleep disturbances similar after 1 and 2 years. The effectiveness of long-term sleep medication use should be re-examined.