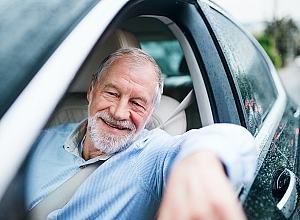 Models to identify preclinical Alzheimer's with a global positioning system (GPS) device’s data had an F1 score of 82% using driving indicators alone; 88% using age and driving; and 91% using age, APOE4 genotype, and driving, reported Sayeh Bayat, a PhD candidate in biomedical engineering at the University of Toronto, who presented the findings at the 2021 Alzheimer's Association International Conference.

The most important driving feature was vehicle jerk, a measure of driving smoothness.

The model that included age, APOE4 genotype, and driving indicators had an area under the receiver operating curve of 0.96. APOE4 status and age were the two most important features for predicting preclinical Alzheimer's disease.

“We found that using machine learning methods, we can identify very subtle patterns in driving that are associated with preclinical Alzheimer's disease,” Bayat told MedPage Today. "When developed to its full potential, a GPS driving biomarker can be a more affordable and scalable alternative to available procedures and methods.

“As opposed to providing an assessment of the patient's status at a given point in time, this biomarker can provide means for continuous monitoring of complex everyday activities and can help identify the behavioural changes that are related to the earliest underlying neurobiological changes,” she added.

“Moving toward using readily available and accessible embedded technologies to monitor brain-related behaviours is where the future is headed,” observed Rhoda Au of Boston University, who wasn't involved with the study.

"Given that everything we do, we do through our brains, by monitoring our everyday actions we are essentially getting a continuous window into our brain function," Au said.

"We can use this information to detect the earliest signs of Alzheimer's disease, potentially intervene when interventions would be most effective, and alter the trajectory of decline to such an extent that we may be able to prevent Alzheimer's altogether," she continued. "This study shows that this imagined future is soon upon us."

In their study, Bayat and co-authors tracked cognitively normal older drivers for one year, from 1 January 1 to 31 December 2019, with an in-vehicle GPS data logger. The data logger and custom software were part of the Driving Real-World In-Vehicle Evaluation System (DRIVES), which recorded date, time, latitude and longitude coordinates, and speed every 30 seconds.

The sample included 64 people with and 75 people without preclinical Alzheimer's, assessed by cerebrospinal fluid biomarkers of amyloid-beta (Aβ42/Aβ40 ratio). Participants were enrolled in longitudinal studies on ageing and dementia at the Washington University Knight Alzheimer Disease Research Center in St Louis and drove at least weekly on average.

The study had several limitations. There was no automatic method to identify drivers and ensure friends or family weren't driving, though the study took steps to control for that, Bayat said.

All participants were from the St Louis area and the findings might not apply to others, the researchers noted, adding that in the future, larger studies could evaluate how race, sex, income, education, or social and cultural norms influence driving patterns in older adults.

Background: Alzheimer'a disease (AD) is the most prevalent form of age-related dementia. The clinical manifestation of AD is generally preceded by a silent preclinical phase during which early AD brain changes are present but dementia symptoms have not yet appeared.

Molecular biomarkers have been used to ascertain the presence of AD brain changes, which are obtained via imaging and lumbar puncture.

However, the widespread use of these methods is limited by cost and availability. Therefore, there is a need for a non-invasive and low-cost solution for identifying individuals who are likely to have preclinical AD. Since the preclinical phase of AD has been shown to impact driving, daily driving behaviours captured using Global Positioning System (GPS) devices can serve as a digital biomarker to detect preclinical AD. The objective of the present study is to use machine learning methods to evaluate the ability of in-vehicle GPS devices to distinguish cognitively normal older drivers with preclinical AD from those without preclinical AD.

Result: The F1 score of the RF models for identifying preclinical AD was 82% using GPS-based driving indicators, 88% using age and driving indicators, and 91% using age, APOE ε4 status and driving. The area under the receiver operating curve for the final model was 0.96. APOE ε4 status and age were the two most important features for predicting preclinical AD, and the most important driving feature was the vehicle’s jerk, which is a measure of driving smoothness.

Facebook
Twitter
WhatsApp
Linkedin
Email
Previous articleCOVID-19 herd immunity. It’s not going to happen, so what next?
Next articleGovernment’s veil of silence over Cuban health workers