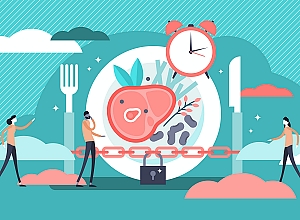 A novel dietary supplement, as part of a ketogenic diet, was linked with a statistically significant reduction in the number of seizures in severe drug-resistant epilepsies in adults and children, found a UK study.

For the study, published in Brain Communications, clinicians evaluated the use of K.Vita®, (also known as Betashot), an oral liquid dietary supplement developed by United College London (UCL) in collaboration with Royal Holloway, University of London, and Vitaflo International Ltd.

The ketogenic diet (KD) consists of high-fat, low-carbohydrate and adequate protein consumption and mimics the fasting state, altering the metabolism to use body fat as the primary fuel source. This switch from carbohydrates to fat for body fuel is known as ketosis.

It is widely used to treat drug resistant epilepsies. However, the highly restrictive diet, which can cause constipation, low blood sugar, and stomach problems, can have poor compliance and is not suitable for everyone. Some KD supplements are also known to be unappetising.

K.Vita is based on novel findings by UCL researchers, who discovered a different underlying mechanism to explain why the KD is effective against epilepsy; in developing a new treatment, researchers also sought to reduce the adverse side effects caused by KD.

A report in Science Daily quotes corresponding author Professor Matthew Walker (UCL Queen Square Institute of Neurology) as saying: “The ketogenic diet has been used for a hundred years to treat epilepsy, helping reduce seizures in both children and adults. It has long been thought the diet was effective due to its production of ketones, however, we now believe the increase in levels of the fatty acid, decanoic acid, also produced by the diet, may provide the powerful anti-seizure effects.

“In this study we evaluated a newly developed medium chain triglyceride (a type of dietary fat) supplement, designed to increase levels of decanoic acid, while also reducing the adverse side effects, and to be more palatable.”

For the feasibility trial, researchers wanted to establish participants' tolerance (side effects such as bloating or cramps) to the treatment, acceptability (flavour, texture, taste) and compliance (how easy it is to use K.Vita at the advised quantity, as part of their daily diet).

As secondary outcomes, they also monitored the frequency of epileptic seizures or paroxysmal events (fits, attacks, convulsions) and whether ketone production was decreased. In total, 35 children (aged three to 18) with genetically caused epilepsy and known to be unresponsive to drugs, and 26 adults with drug-resistant epilepsy (DRE), were given K.Vita liquid supplements (a drink), to be taken with meals. They were also asked to limit high-refined sugary food and beverages from their diets.

The trial lasted 12 weeks with K.Vita treatments increasing incrementally over time, taking into account individuals' tolerance to the treatment. In total, 23/35 (66%) children and 18/26 (69%) adults completed the trial, i.e they were continuing to take K.Vita at 12 weeks. Gastrointestinal disturbances were the primary reason for discontinuation, and their incidence decreased over time

More than three-quarters of participants/caregivers reported favourably on sensory attributes, such as taste, texture and appearance, and ease of use. In regards to the secondary outcomes, there was a mean 50% reduction in seizures or paroxysmal events, and fewer than 10% of people on the diet produced significant ketones.

Commenting on the findings, Walker, who is also a consultant neurologist at the National Hospital for Neurology and Neurosurgery, said: “Our study provides early evidence of the tolerability and effectiveness of a new dietary supplement in severe drug-resistant epilepsies in adults and children and provides a further treatment option in these devastating conditions. It also offers an alternative, more liberal, diet for those who cannot tolerate or do not have access to ketogenic diets."

He added: "While this study was not designed to include enough patients to fully assess the supplement's effects on seizures, it is exciting to report that there was a statistically significant reduction in the number of seizures in the group overall after three months of treatment.

"Furthermore, high ketone levels were not observed in more than 90% of the participants. This indicates that the effect of the diet was independent from ketosis; this is important because high ketone levels in the ketogenic diets contribute to both short- and longer-term side effects."

First author Dr Natasha Schoeler, research dietitian at UCL Great Ormond Street Institute of Child Health, said: "This novel dietary approach for epilepsy management involves following the principles of a healthy balanced diet alongside use of K.Vita, allowing greater dietary freedom compared to ketogenic diets. Our approach also requires much less input from a specialist dietician than is required by traditional ketogenic diets, and so may allow more widespread access to people with drug-resistant epilepsy."

Researchers say larger, controlled studies of K.Vita are now needed to determine the precise epilepsies and conditions in which the supplement is most effective.

Abstract
This prospective open-label feasibility study aimed to evaluate acceptability, tolerability and compliance with dietary intervention with K.Vita, a medical food containing a unique ratio of decanoic acid to octanoic acid, in individuals with drug-resistant epilepsy. Adults and children aged 3–18 years with drug-resistant epilepsy took K.Vita daily while limiting high-refined sugar food and beverages. K.Vita was introduced incrementally with the aim of achieving ≤35% energy requirements for children or 240 ml for adults.

Primary outcome measures were assessed by study completion, participant diary, acceptability questionnaire, and K.Vita intake. Reduction in seizures or paroxysmal events was a secondary outcome. 23/35 (66%) children and 18/26 (69%) adults completed the study; completion rates were higher when K.Vita was introduced more gradually. Gastrointestinal disturbances were the primary reason for discontinuation, but symptoms were similar to those reported from ketogenic diets and incidence decreased over time.

At least three-quarters of participants/caregivers reported favourably on sensory attributes of K.Vita, such as taste, texture and appearance, and ease of use. Adults achieved a median intake of 240 ml K.Vita, and children 120 ml (19% daily energy). Three children and one adult had ß-hydroxybutyrate >1mmol/L. There was 50% (95% CI 39–61%) reduction in mean frequency of seizures/events. Reduction in seizures or paroxysmal events correlated significantly with blood concentrations of medium chain fatty acids (C10 and C8) but not ß-hydroxybutyrate.

K.Vita was well accepted and tolerated. Side effects were mild and resolved with dietetic support. Individuals who completed the study complied with K.Vita and additional dietary modifications. Dietary intervention had a beneficial effect on frequency of seizures or paroxysmal events, despite absent or very low levels of ketosis.

We suggest that K.Vita may be valuable to those with drug-resistant epilepsy, particularly those who cannot tolerate or do not have access to ketogenic diets, and may allow for more liberal dietary intake compared to ketogenic diets, with mechanisms of action perhaps unrelated to ketosis. Further studies of effectiveness of K.Vita are warranted.

Epilepsy: Seizures not forecastable as expected