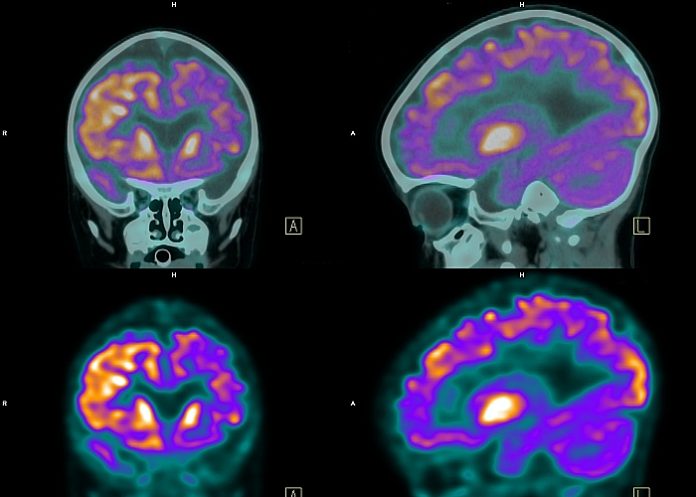 The age of symptom onset in sporadic Alzheimer’s is strongly correlated with the age that an individual reaches a tipping point in amyloid accumulation in the brain, measured in a PET scan, found a study in Neurology. An algorithm yields an estimate of how far a person has progressed toward dementia and how much time is left before cognitive impairment sets in.

In those who eventually develop Alzheimer's dementia, amyloid silently builds up in the brain for up to two decades before the first signs of confusion and forgetfulness appear. Amyloid PET scans already are used widely in Alzheimer's research, and this algorithm represents a new way of analysing such scans to approximate when symptoms will arise. Using a person's age and data from a single amyloid PET scan, the algorithm yields an estimate of how far a person has progressed toward dementia and how much time is left before cognitive impairment sets in.

“I perform amyloid PET scans for research studies, and when I tell cognitively normal individuals about positive results, the first question is always, ‘How long do I have until I get dementia?’” said senior author Dr Suzanne Schindler, an assistant professor of neurology. “Until now, the answer I'd have to give was something like, ‘You have an increased risk of developing dementia in the next five years.’ But what does that mean? Individuals want to know when they are likely to develop symptoms, not just whether they are at higher risk.”

Schindler and colleagues analysed amyloid PET scans from 236 people participating in Alzheimer's research studies through Washington University's Charles F. and Joanne Knight Alzheimer Disease Research Center. The participants were an average of 67 years old at the beginning of the study. All underwent at least two brain scans an average of 41⁄2 years apart.

“When we look at the brains of relatively young people who have died with Alzheimer's, they typically look pretty healthy, other than Alzheimer's,” Schindler said. “But older people more frequently have damage to the brain from other causes, so their cognitive reserves are lower, and it takes less amyloid to cause impairment.”

The power of this new technique is that it requires just one brain scan, plus the person's age. With that data, the model can estimate the time to symptom onset, plus or minus several years. In this study, the correlation between the expected age of symptom onset and the true age at diagnosis was better than 0.9 on a scale of 0 (no correlation) to 1 (perfect correlation).

After age, the genetic variant APOE4 is the strongest risk factor for Alzheimer's dementia. People who carry one copy of the variant are two to three times more likely to develop Alzheimer's dementia than the general population, and people who carry two copies are 10 times more likely. In this study, people with the high-risk variant hit the tipping point younger, but once that point was passed, they followed the same trajectory as everyone else.

At an out-of-pocket cost of about $6,000, amyloid PET brain scans are too expensive for routine clinical use. However, this algorithm could help accelerate the pace of drug development by streamlining clinical trials.

“Most participants in clinical trials designed to prevent or slow Alzheimer's symptoms do not develop symptoms during the trials,” Schindler said. “That's a lot of time and effort – for the participants as well as the researchers – that doesn't yield useful data. If we could do trials only on people who are likely to develop symptoms in the next few years, that would make the process of finding therapies much more efficient.”

Published in Neurology on 9 September 2021;

Results
Amyloid accumulation was evaluated in 236 individuals who underwent more than one amyloid PET scan. The average age was 66.5 ± 9.2 years and twelve individuals (5%) had cognitive impairment at their baseline amyloid PET scan. A tipping point in amyloid accumulation was identified at a low level of amyloid burden (SUVR 1.2), after which nearly all individuals accumulated amyloid at a relatively consistent rate until reaching a high level of amyloid burden (SUVR 3.0). The average time between levels of amyloid burden was used to estimate the age at which an individual reached SUVR 1.2. Longitudinal clinical diagnoses for 180 individuals were aligned by the estimated age at SUVR 1.2. In the twenty-two individuals who progressed from cognitively normal to a typical AD dementia syndrome, the estimated age at which an individual reached SUVR 1.2 predicted the age at symptom onset (R2=0.54, p<0.0001, root mean square error (RMSE) 4.5 years); the model was more accurate after exclusion of three likely misdiagnoses (R2=0.84, p<0.0001, RMSE of 2.8 years).

Conclusions
The age of symptom onset in sporadic AD is strongly correlated with the age that an individual reaches a tipping point in amyloid accumulation.

When older couples are spatially close their heart rates synchronise